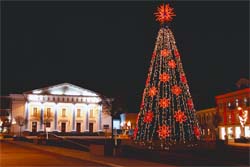 The 25th of December is the time when the Christmas vacations begin, and at this time Vilnius is more than ever full of tourists. The lights on the Town house and the Cathedral squares were ignited at the very beginning of December, but the highest fur-tree on the Television tower will sparkle with lights only since the 25th of December. Some special design studios which have already within 11 years illuminated Vilnius for New Year have been engaged in illumination of the city this year. This year they have offered the newest and modern decorations, which are even energy-saving besides.

As for the actions except that will be held in the New Year's Eve, the city-folk and guests of the capital can visit the following actions:

The 6-28th of December the so-called “Christmas bus” will make trips, which will try to cheer up the city-folk even in the most remote parts of the city.

From the 20th of December till the 4th of January a series of free-of-charge concerts in churches of Vilnius will be held. Spectators can listen to classical and sacral music. The main organizer of these concerts is the opera theatre soloist, Sigute Trimakajte by name.

The 26th of December. The Feast of Immaculate Conception church, the Invention of the Cross Church, the Church of Christ, the Saint Johns' Church (for those who have bad sense of hearing).

The 3rd of January. The Holy Cross Church (Bonifrates)

The 4th of January - the Cathedral.

The 21- 28th January. The action “Bank of gifts” will be held on the Town house square. The purpose of the given action is to help in gifts delivery in an original way. It is enough to bring a gift to the Town house square and to address to organizers who will contact the addressee and will call it to the square and will hand over a gift.The 24th of December, 22.00. The consecration of the crib will be held at the Cathedral square.

The 25th of December, 16.00. The lights of the main country’s fur-tree that is situated on the Television tower will be switched on.

The 26th of December, 19.30. The Christmas concert on the Cathedral square will begin.

The 6th of January, 16.30. The procession of Magians on the Cathedral square will begin.