In hotels and restaurants of Vilnius there will be no electricity 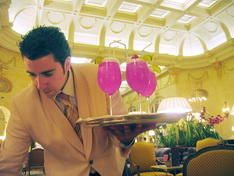 Since the 11th of June, hotels and restaurants of Lithuanian capital, Vilnius, will start to hold the actions of protest against increase in the VAT rate up to 19. From 22 o'clock till 24 o'clock in hotels and the cafes of the city will be disconnected electricity and restaurants music will stop playing. Guests and visitors will be serviced at candles. This day in Vilnius will be held the international investment forum.

Further it is planned to hold the similar action on the 29th of June, when in Vilnius the parliamentary assembly of OSCE will be held. The third stage is planned for the 5th of July, when Lithuania will celebrate the 1000 anniversary of the first mentioning of a word “Lithuania”. The action will be held under the slogan: “Lithuania is closed! We come back on 1000 years ago period”. If nothing will be changed, the given actions can turn into in a general strike.

The dissatisfaction of hotel and restaurant business representatives is caused with a cancelling of preferential 5 per cent rate tariff of the VAT and introduction since the 1st of January of a new rate of the VAT up to 19. According to Evalda Shishkauskene, the president of the Lithuanian hotels and restaurants association, they have decided to hold such actions because of blank despair. By preliminary estimate for the first half a year 2009 the turnover of restaurants has decreased on 40 per cent and occupation of hotels accommodations has decreased on 25 per cent. About 10 000 person have lost their work in this sector. If nothing is going to be changed, about 20 companies of tourist industry can be closed already by the end of this year.

By the way in 22 countries of the European Union restaurant and hotel services pay the preferential tax of the VAT, in 20 of them it does not exceed 10 per cent.