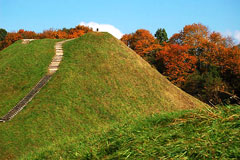 Kernave is a cradle of Lithuania. It is an ancient capital of the Grand Duchy of Lithuania, situated on the banks of the river Neris. Picturesque hills of Kernave are considered to be a visit card of the Lithuanian tourism.

What is interesting about Kernave? Kernave was firstly mentioned in chronicles in the 13th century but nevertheless it is a unique place, a cradle of the Lithuanian people. Archaeological research, which was held and is still held in Kernave showed that people lived in this place 10000 years before it was mentioned in chronicles. The hills in Kernave and the artifacts found there are the main part of the reservation, which was founded by the Lithuanian authorities to preserve the unique place. Nowadays Kernave reservation has the territory of more than 200 hectares. It is the first centre of the Grand Duchy of Lithuania and it is mentioned in the list of the world cultural heritage by UNESCO.

Kernave itself is a part of reservation. Tourists can visit a picturesque church in Kernave, which was built in neo-Gothic style in the 30s of the 20th century to commemorate the 500 anniversary of the Lithuanian Grand Duke Vitovt. It was built on the same place, where the original church was built in the 14th century. Its ruins were found during the archaeological excavations and it is named after the Grand Duke of Lithuania.

One of the most interesting places in Kernave is the museum. It is situated in the building of the old primary school. There is a rich collection of archaeological, ethnographical and photo exhibitions. They show the historical development of Kernave. Now it is closed because it is being restored. It is going to be opened in 2009.

Kernave has been a traditional place of different festivals and holidays for many years. All these festivals are devoted to the history of Lithuania and its customs. Most of the festivals are held in summer. For example, each year on the 6th of July Kernave becomes a national centre of the state holiday of Lithuania known as the Day of Duke Mindaugas Coronation. A part of this holiday is one of the greatest archaeological festivals of the Baltic states and the States of the Eastern Europe known as the Days of the Living Archaeology.

Nowadays you may visit Kernave every day from 9 am till 5 pm. The tickets for an excursion cost 12 Lit per person.

The site of the reservation is https://www.kernave.org