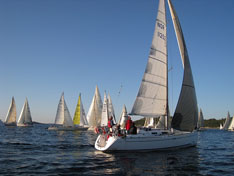 For the first time Klaipeda will accept one of the stages of international sailing regatta The Tall Ships' Races 2009. Here will be held the final stage and celebrating on the occasion of the Regatta finishing off. The Tall Ships' Races get off its mark in the Polish city Gdynia on the 2nd of July, and further the route will pass through St.-Petersburg (Russia), Turku (Finland) and on the 31st of July the participants will arrive to Klaipeda where they will be till the 3rd of August. The main festivities will be held already after the Regatta finishing off. Besides, these actions will synchronize with the traditional “Holiday of the sea”, which is annually celebrated in Klaipeda.

More than 100 ships will arrive to Klaipeda; about 4000 members of crews will visit the city, the main part of which is the youth. One of the main objectives of carrying out this regatta - is physical and spiritual development of the youth, drawing the youth’ attention to a healthy way of life, increasing their interest to seafaring, an establishment of new fiendlike contacts with the contemporaries from other countries. The main sponsor is the international organization The Sail Training International (the World Association of educational sailing regattas). One of requirements to take participation is presence not less than half of command members, whose age is from 15 till 25 years.